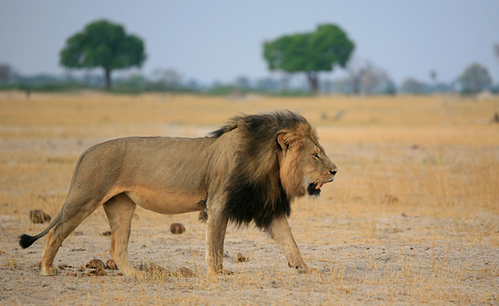 There has been a huge global outcry on social media in response to the killing of Cecil the lion. The hunt to find his killer, Walter Palmer – a US dentist, is on with thousands of users calling for him to be extradited to Zimbabwe and be brought to justice and many more have gone into over-drive to shame him online.

What caused this social outcry?

Cecil the lion was a renowned tourist attraction for Zimbabwe and a resident of Hwange National Park. He was being monitored as part of an Oxford University research project and wore a GPS collar, which enabled his last movements to be tracked.

According to the Zimbabwe Conservation Task Force (ZCTF) Cecil was lured out of Hwange National Park using bait and shot with a bow and arrow. They think Cecil escaped before being tracked down 40 hours later when Palmer shot him with a gun, before beheading and skinning him. Attempts were made to destroy Cecil’s GPS collar and therefore, his remains may never have been found.

Social media – the hunter has become the hunted

#CecilTheLion has been trending on Twitter since the news hit the headlines three days ago, appearing more than 250,000 times in its first 24-hours. Some mourned Cecil, like Ricky Gervais who tweeted a RIP #CecilTheLion which received more than 31,500 re-tweets and was favorited 34,600 times.

Others used social media to describe Palmer as a “coward” and a “blood thirsty trophy hunter” and attack his business. Palmer’s dental practice has been sieged with angry protesters and he has had to shut down his website and Facebook page, plus hundreds of mainly one-star reviews have been posted on his Yelp and Google business profiles.

There is a parody Twitter account created in the name of Palmer’s practice – River Bluff Dental – to shame and mock him, and some users mistakenly thought the account was genuine and the outrage online was amplified.

Social media is also integral to the mobilisation of demonstrations and petitions to “bring Cecil’s killer to justice”.

Palmer appointed US PR firm, J Austin & Associates to represent him and help save his reputation and business. They released a well-written press statement in which he admits to the killing and claims that he did not know the lion’s identity and had relied on the expertise of his local professional guides to ensure a legal hunt.

Palmer/and or his PR agency also emailed his dental patients apologising for the disruption to his practice saying he was in the news “for reasons that have nothing to do with my profession or the care I provide for you”.

J Austin & Associates took much criticism for accepting the work and within 48 hours they were keen to point out that they had ended their relationship with the Palmer story, tweeting it and releasing a statement.

It was reported yesterday that US officials were now investigating the legality of the hunt and they were trying to locate Palmer. He has gone from Minnesota dentist and long-time hunting enthusiast to a villain at the epicenter of an emotive debate over the ethics of wildlife trophy hunting. His name and professional reputation is unlikely to ever break away from the digital legacy of #CecilTheLion.