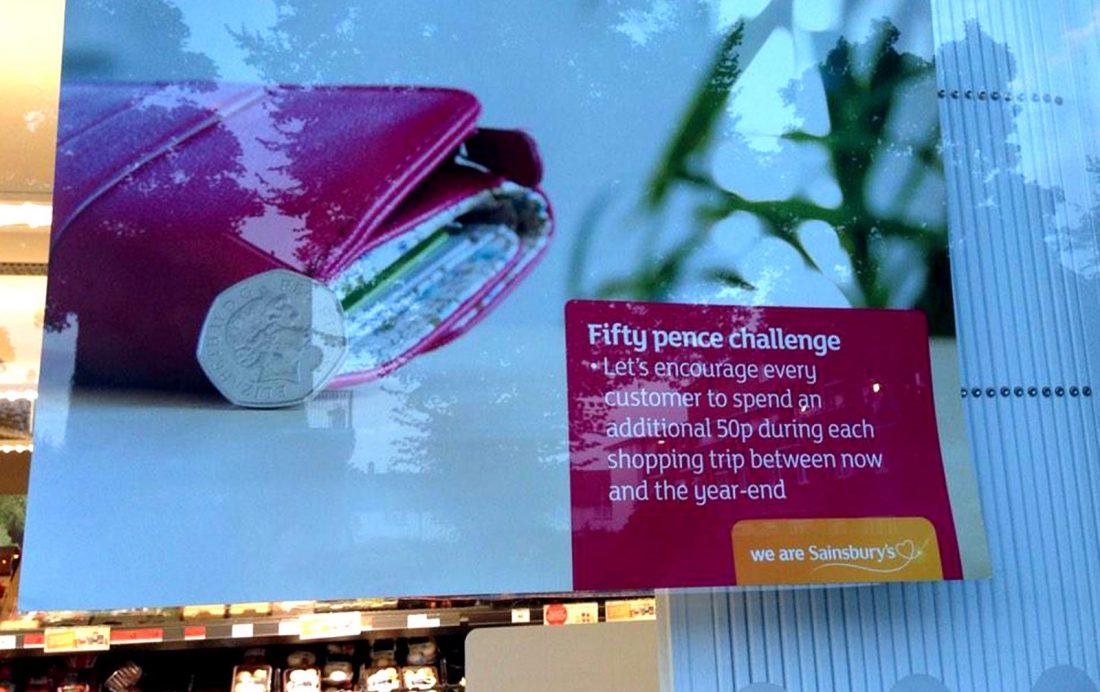 The press office at Sainsbury’s HQ has been very busy managing brand reputation after a poster gaffe left some customers reeling.

A poster encouraging Sainsbury’s staff to get shoppers to spend more was displayed in a window of a store in Stratford – by mistake. The ‘motivational’ poster challenged staff to encourage customers to spend 50p more during each shopping visit between now and the end of the financial year.

A customer, Chris Dodd, spotted the poster and tweeted a picture of it to the official Sainsbury’s Twitter account with the message: “Not sure this is supposed to be in your window”.

Sainsbury’s responded via their Twitter account asking which store it was in, but Mr Dodd refused to inform them, saying he would prefer customers to know that Sainsbury’s were doing this.

The story has since made national news headlines and prompted outrage, disbelief and amusement among social media users, see #50pChallenge. So why is this?

Customers ‘buy into the brand’
Consumers know that retailers are out to get them to spend more and that’s what keeps the economy going – however we don’t want to know about it and may feel betrayed by the realisation that Sainsbury’s seemingly isn’t helping us to ‘Live well for less’.

Captured imaginations
Companies exist to make money – that’s not news. However it’s the first time it’s been so overtly stated externally by a retailer that moneymaking schemes to entice customers to spend more do exist.

Nothing is internal
I’m sure there are hundreds of campaigns like this – we just don’t know about them. It was an internal communications campaign that was mistakenly made public, but you can never guarantee that information will not be shared externally – particularly in today’s world of social media.

The power of social media
Twitter is arguably the only social media platform that can engineer such a rapid and real-time response. People can share their opinion with thousands of others – instantly. The poster was removed after a few hours but by then the tweet had trended and was old news.

They didn’t do it the Greggs Bakers’ way
Greggs impressed me a month ago with their crisis communications response on Twitter after an offensive version of their logo appeared on their Google profile, and I wrote a blog about it. Sainsbury’s seemingly underestimated how far and wide that tweet was going to go and didn’t respond in a way that could turn events into a positive piece of PR and regain trust, and they issued this stoic official statement:

“We often use posters to make store targets fun and achievable for our colleagues. They are intended for colleague areas in the store, but this one was mistakenly put on public display.”

Sainsbury’s is a brand that usually gets it right. I guess it just goes to show how difficult brand management is and how easily the shop front can slip.